SIE Renom Chalaronne wanted to reduce losses in drinking water and increase its network performance, a goal which became increasingly critical in light of the Grenelle II Law. This law stipulates that network yield must be greater than 85% in urban areas and between 65% and 85% in rural areas. SIE Renom Chalaronne was able to use a combination of Hydreka products to optimize the pressure in their network, leading to huge gains in water conservation, and reduced operating costs.

The region, located rurally on the plateau Dombes, is composed of 10 municipalities and has 5000 total inhabitants. It has 260 total km of drinking water network that serves the area, but is compromised by the 75 km of network that are PVC bonded. PVC bonded networks use glue at their joints that is prone to developing micro-leaks. This can lead to huge water losses over time. In order to comply with the Grenelle II law, rectifying action needed to be taken.

One option was to rebuild the network ; or, at least, replace the significant portion that is PVC bonded. This, however, would be hugely costly and time consuming, so the SIE looked for alternatives. Hydreka was able to offer a solution in the form its pressure modulation device, Pegasus +. Optimizing the pressure in a network reduces volumes lost to leakage while also reducing strain on the network, thereby increasing it longevity. This makes it an effective and economical solution both in the short and long term.

After the first few months of use , the average flow has already decreased by 6 m 3 / h. This is equal to 150,000 l each day, enough to fufill the average daily need of over 400 people.

Philippe Pottier, Suez Project Manager, said of the project, « In view of the results obtained during the installation, we can agree that the solution deployed is a real success for both the operator and the client and its users of the service. The project owner seens in this system a limitation of the water losses and makes it possible to ensure a yield of network sufficient to respect the criteria of the Grenelle II law. The operator, meanwhile, sees a decrease in electrical energy charges, the cost of labor seeking leaks, and a better knowledge of the operation of its networks and a damping of hydraulic jolts generating breakages. » 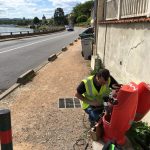 Permanet F Detects Leaks in TrévouxCase studies
We use cookies to ensure that we give you the best experience on our website. If you continue to use this site we will assume that you are happy with it.Ok